Notify me when this product is available:

Features:
GameSir G5 is the award-winning next-generation gaming controller and the first gamepad that dedicatedly build for mobile MOBA games and shooting games. Merging several revolutionary inventions: trackpad, surrounding button layout, extra configurable buttons, GameSir G5 strikes the ordinary way to mobile gaming and brings out the brand-new control solution with your Android smartphone. If you are a mobile gamer who loves battling online, it is the ultimate secret weapon to win.
GameSir g5 has literally a different look from the other controllers. It has a cool and futurist design, but what makes the GameSir G5 so unique is the trackpad and the around button sets on the right side of the gamepad. The trackpad is responsive and sensitive to track your finger’s input precisely. It allows you to tap, drag to cast a spell or move your camera around in shooting games. The trackpad is also loaded with four raised dots to secure your blind control. It allows you to tap on the dots as pressing ABXY buttons.
Surrounding the trackpad are the buttons, with the new layout and design, the buttons are designated to simulate multi-function hotkeys work for different occasions. First, they are MOBA friendly. If you are playing Arena of Valor, the upper buttons function as level-up spell hotkeys; the lower buttons become the summoner spell hotkeys. Second, if you are playing Rules of Survival, those buttons are the supplier pick-up hotkey.
It also makes the response of commanding slower, which is worse for gaming, Instead of using the traditional linear moving triggers, it uses mechanical triggers with a short key travel distance. The 1mm distance of key travel gives you an effortless pressing experience yet still provides you a clear and clicky feedback.
Dual shoulder L4/L5 triggers and dual L5/R5 rear buttons. It supports the custom assignment of any button function in accordance with the needs.
The Ergonomic grip secures players from the hand injury and gets rid of the hand fatigue of prolonged gaming session.
It can be used as a mouse keyboard converter battledock, you can use your wireless mouse and keyboard for mobile gaming through it.
Working Platforms: Android / iOS (only work for certain apps)
Connection: bluetooth 5.0
Cable Length: 39.37 in.
Battery Life: 18 hr.
Vibration Feedback: No
Auto-fire turbo mode: Yes
Battery Capacity: 800mAh battery
Dimensions: 6.10 x 3.98 x 2.56 in.
Gross Weight: 0.53 lb.
Package Included:
2 x Gamesir G5 Gamepad 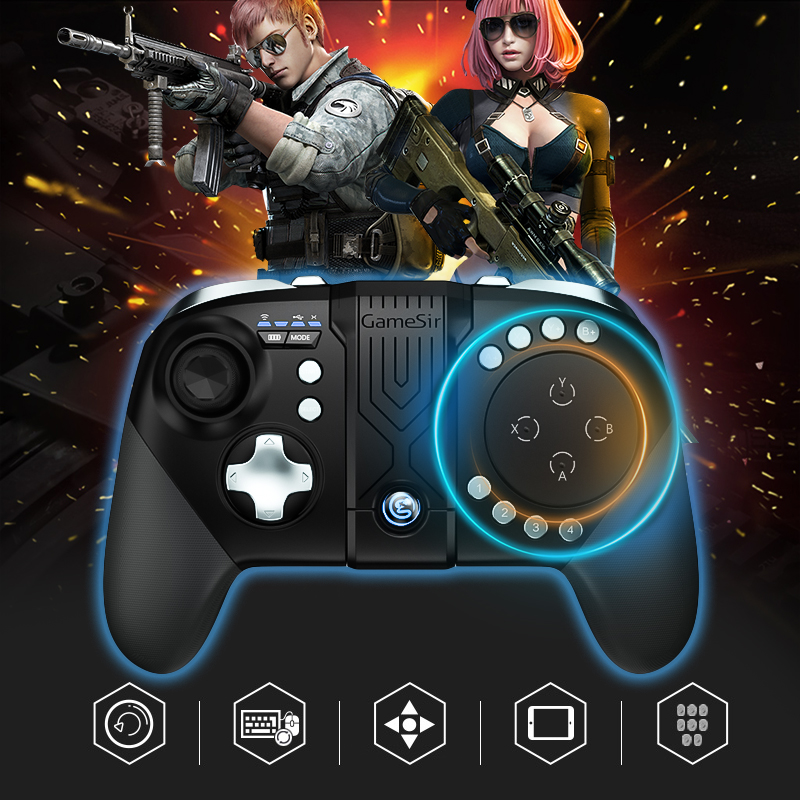 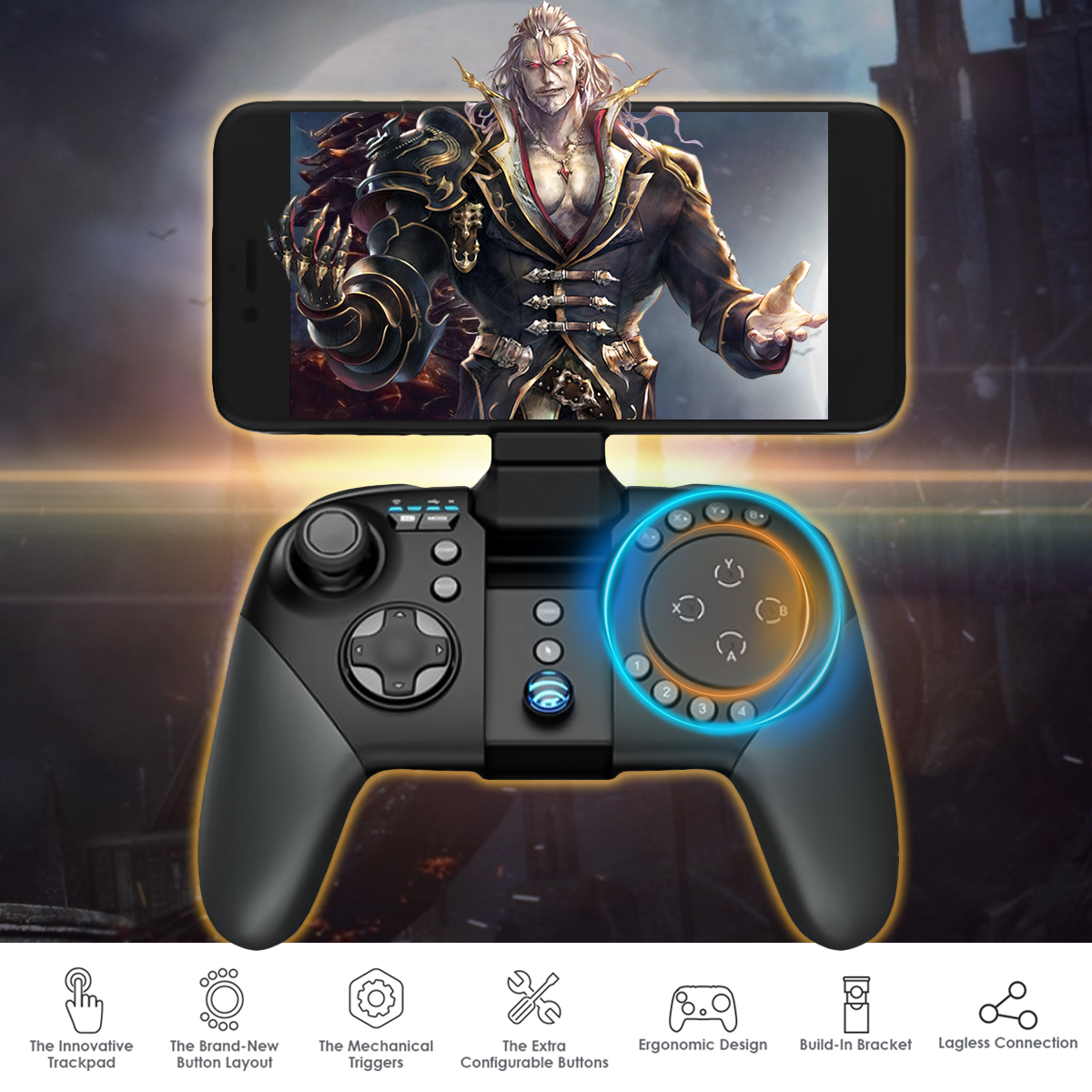 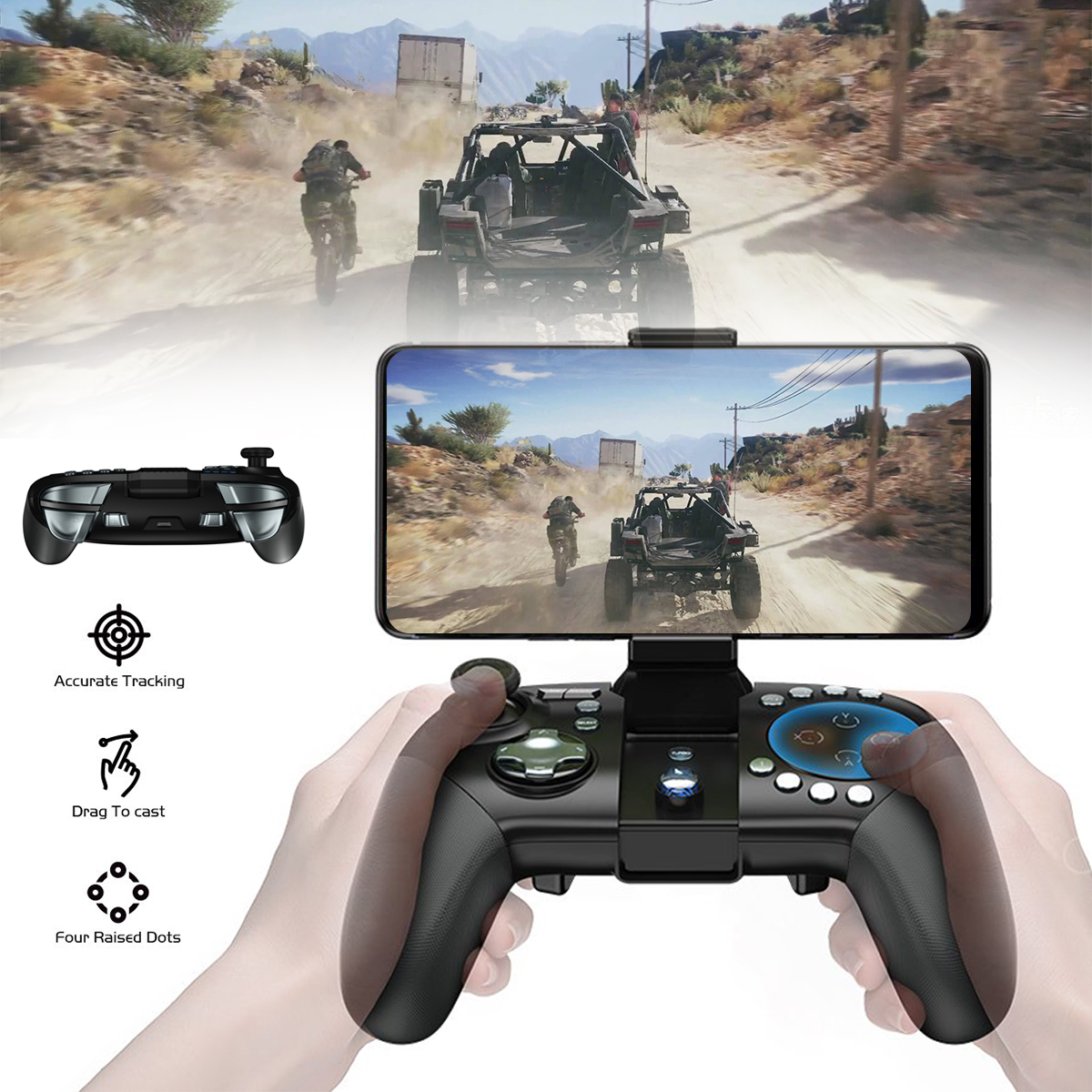 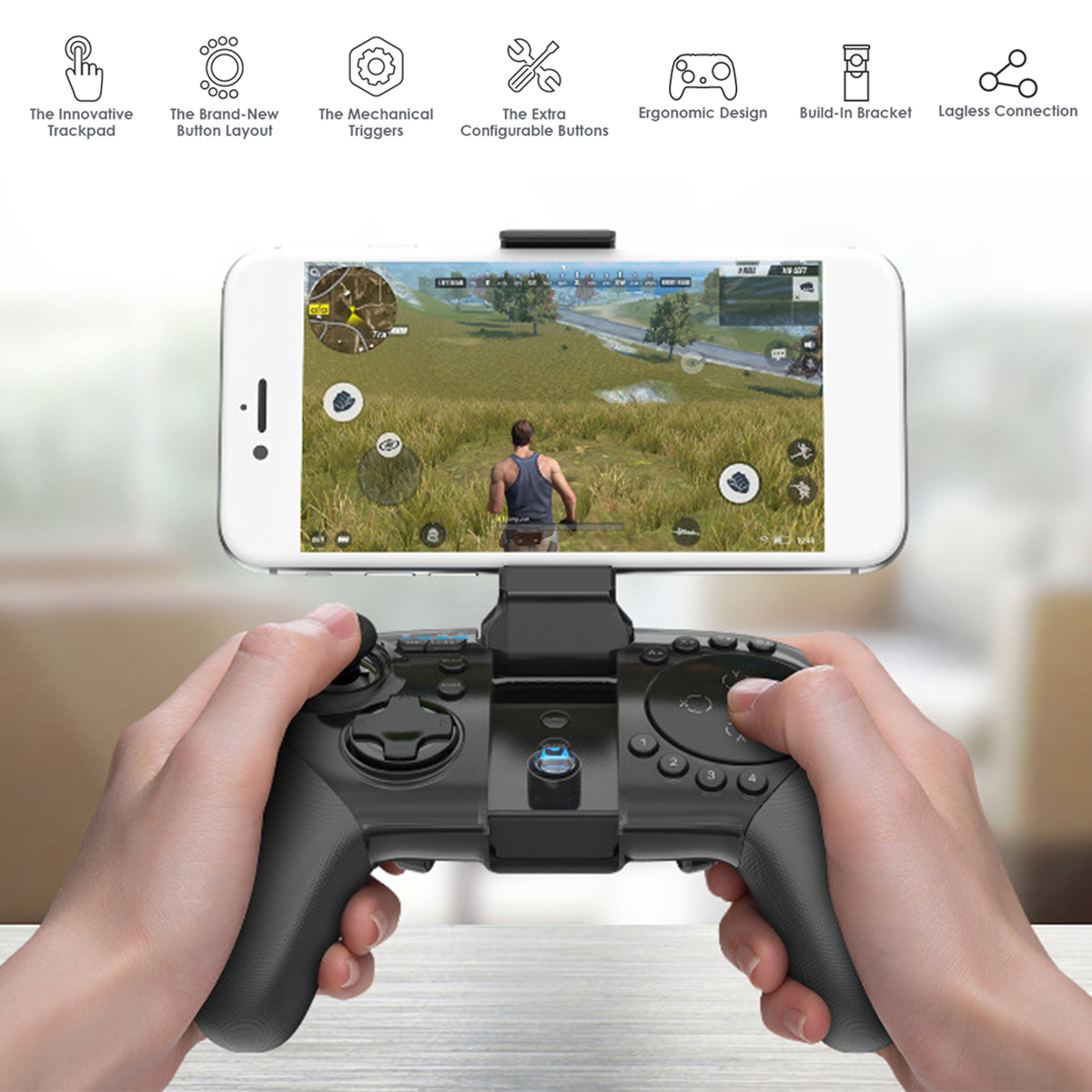 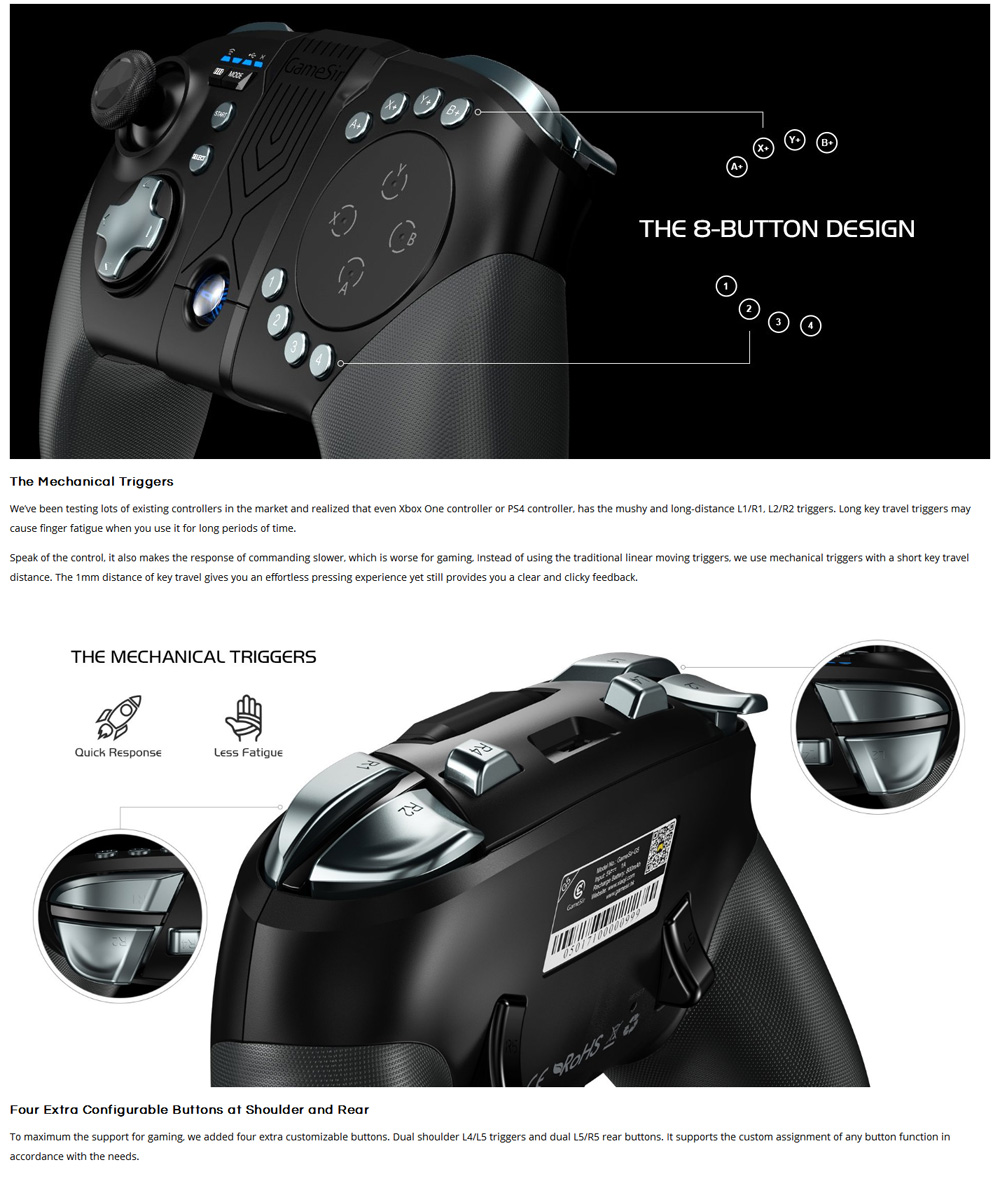 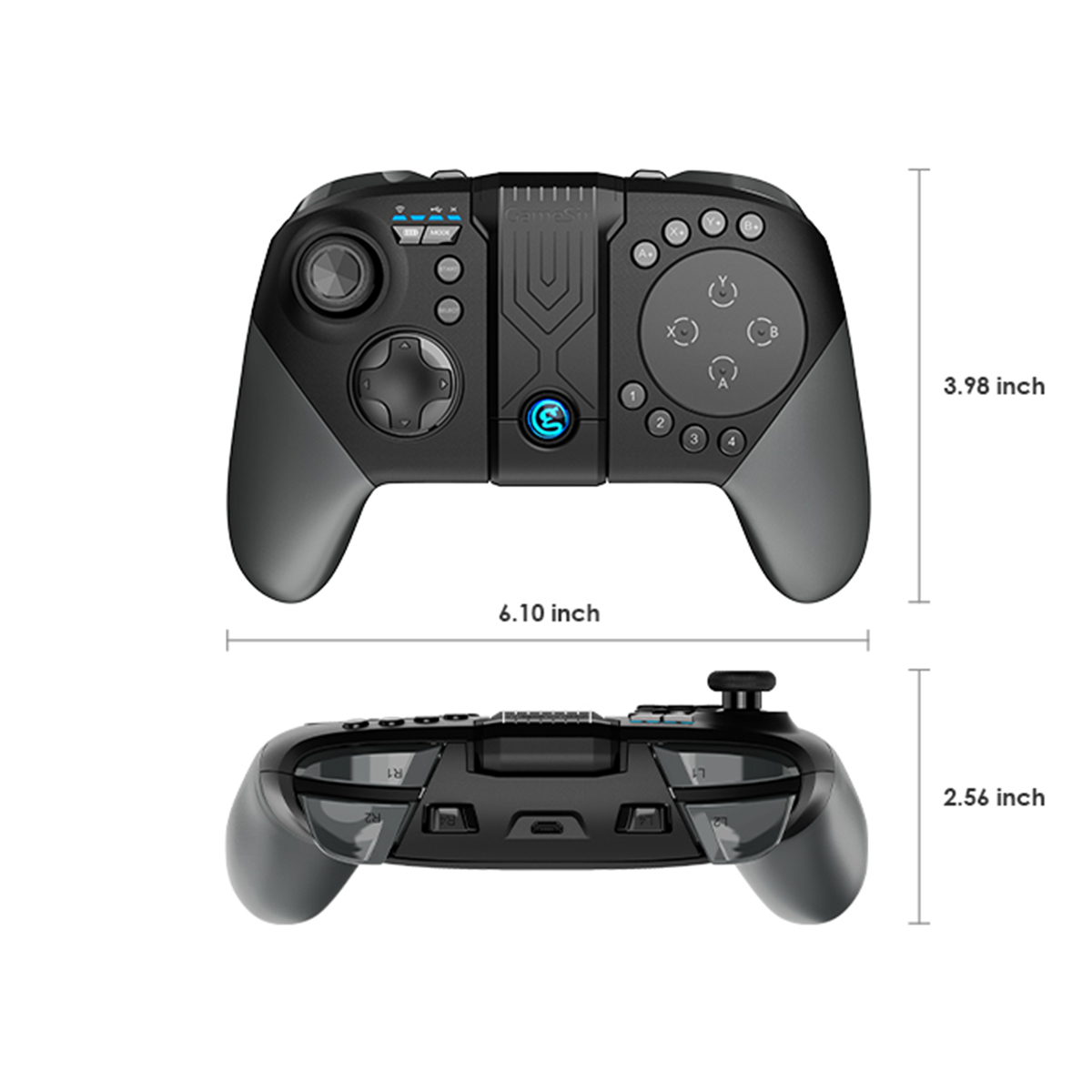 Ask about this product

Your bag is currently empty.

Continue shopping
Your Bag
×
Someone purchased a BuyPluss